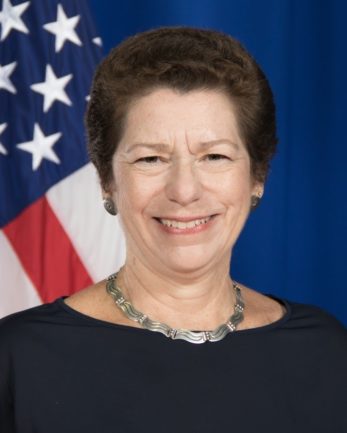 Ellen Thorburn is a career Foreign Service Officer with the U.S.  Department of State since 1991.  Most recently, she was the Senior Consular Representative to the European Union in Brussels.  She has served as a Consular Officer at U.S. Embassies in Yemen, Haiti, France, Estonia, Benin and Hungary, as well as Washington, DC.  From 2008 until 2011 she served as Deputy Chief of Mission at the American Embassy in Lomé, Togo.

Ms. Thorburn is originally from Michigan.  She holds a B.A. in Economics and Sociology and a B.A. in French from Michigan State University.  She also earned a Master’s in Public and International Affairs from the University of Pittsburgh and her law degree (J.D.) from George Washington University.  Prior to joining the Foreign Service, she ran management training programs for USAID funded participants.