Home Home | Our Relationship | John T. Godfrey U.S. Ambassador to the Republic of the Sudan 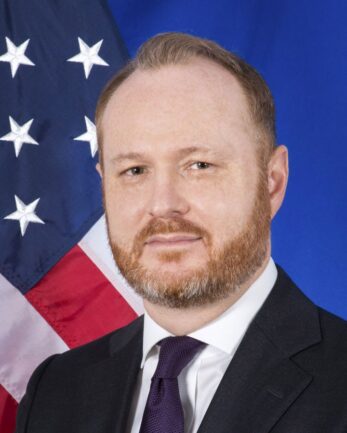 John Godfrey, a career member of the Senior Foreign Service with the rank of Minister-Counselor, is U.S. Ambassador to the Republic of the Sudan.  He previously served as acting Coordinator for Counterterrorism and acting Special Envoy to the Global Coalition to Defeat ISIS.  Prior to this he served as Principal Deputy Coordinator, and before that as Deputy Coordinator for Regional and Multilateral Affairs, in the Counterterrorism Bureau.  Prior to that he was acting Deputy Chief of Mission (2017-2018) and Political Counselor (2015-2016) at U.S. Embassy Riyadh.  He served as Chief of Staff to the Deputy Secretary of State during a period that encompassed Russia’s invasion of Ukraine, the Egyptian Armed Forces’ removal from office of President Morsi, and the emergence of ISIS.  Previous positions also include Arms Control Counselor at the U.S. Permanent Mission to International Organizations in Vienna; Deputy Political Counselor for Northern Affairs at U.S. Embassy Baghdad; and Political and Economic Counselor at U.S. Embassy Tripoli, where he was part of the small team that finalized the U.S.-Libya Claims Settlement Agreement, securing compensation for families of victims of the Lockerbie bombing and other acts of terrorism.