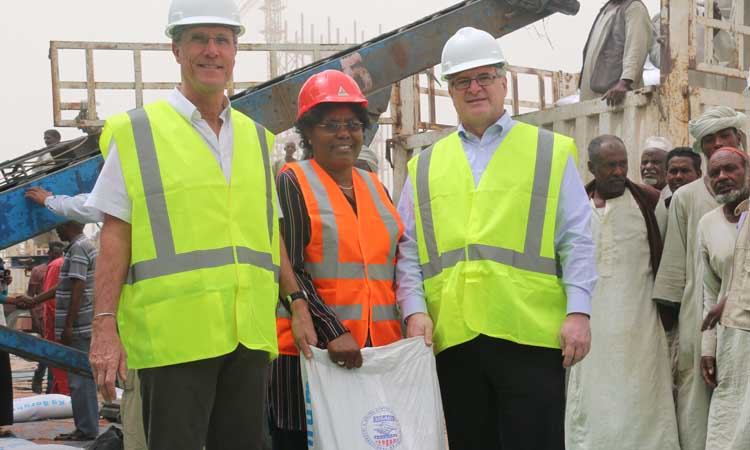 Port Sudan, Red Sea State, Sudan – In mid-April 2017, the United States, through the U.S. Agency for International Development (USAID), in coordination with the United Nations World Food Program (WFP), welcomed the arrival of the third shipment of urgently needed food assistance for Sudan.  The Liberty Glory maritime vessel arrived in Port Sudan on April 16, 2017, to deliver 47,500 metric tons of emergency food to support Sudanese families facing food insecurity, including those displaced by conflict, as well as vulnerable South Sudanese refugees in Sudan.

“USAID is pleased with our strong partnership with WFP which enables us to assist those in need of critical food assistance, especially in Darfur, which has been affected by displacement for many years. As more refugees from neighboring South Sudan have crossed the border into Sudan, USAID also provides urgent food assistance to those who need it most,” said USAID Mission Director Dr. Jeffrey Ashley.

The United States has long been a major supporter of the Sudanese people and continues to work to address critical food and nutrition needs for vulnerable populations through its partnership with WFP. In addition to providing U.S.-grown commodities like sorghum, the United States also supports WFP to provide food insecure families with locally purchased food and, where local markets are functioning, vouchers to purchase food.

The United States has contributed over $95 million in emergency food assistance, in fiscal year 2017, through WFP and other implementing partners in Sudan.  This assistance helps to feed more than 2.5 million people in Sudan annually, internally displaced persons, refugees, host communities, and other food insecure populations.

The United States remains deeply committed to the Sudanese people.